Stock market bubbles don’t grow out of thin air. They have a solid basis in reality, but reality as distorted by a misconception

Such a cliché, right? We’ve been hearing that the market is in a bubble for at least 4 years now and everybody is numbed by the statement to such an extent that people and investors cease to care. That is how bubbles get even bubblier- people get complacent and subscribe to the “bigger fool approach”: valuations don’t matter anymore, somebody will buy the stock after me anyway. That is why I included the quote from a legendary investor Mr. Soros- it is a distortion of reality and history teaches us that bubbles burst sooner or later.

Disclosure at the beginning!

I am not a “the end is nigh” preacher, I am not forecasting a fall or trying to estimate when it comes. I think it will happen eventually, but have no idea when or how.

Let’s move on with the article.

How do we know we’re in a bubble?

There are many ways to spot bubbles in the market. The first one is quite obvious for me as a value investor: I come across more and more companies, which trade at higher prices than their intrinsic values. Not only I encounter higher number of such companies, but also the severity, i.e. the margin by which the companies are overvalued is higher.

Another one is a behavioral observation pointed out by another legendary investor Peter Lynch: when dentists, plumbers or other people not in the finance industry start giving advice on stocks, it’s time to get out. Well we’re exactly in that situation right now. The emergence of low-cost, discount brokers and online forums such as Reddit give prominence to people without any credentials to voice their strong opinions on funky stocks (yes, I am looking at you GameStop).

Don’t get me wrong- I am a huge fan of accessible investing for the “average Joe”, but people preaching Tesla or Zoom, which coincidentally rise and thus reinforcing their confirmation bias is flat out gambling. Investing should be about rationality and evaluation the business itself, not about betting on the recent rally stock.

Those were of course completely anecdotal, subjective observations and don’t prove anything. Let’s take a look at some more quantitative metrics which are used to evaluate overheating of the market- Shiller’s PE, Buffett Indicator and Tobin’s-Q.

Just as we can look at a single company’s PE ratio to judge it’s relative expensiveness, we can do something similar with the whole market. However, standard PE of the whole market would be misleading due to economic recessions and expansions, as well as crises which skew it and render it unusable. That’s why we use Shiller’s PE, which normalizes the metric. You can read more about it here.

In the chart, you can see that currently the ratio is more than 100% of its all-time historical average and we are reaching the dot.com bubble crisis levels. History maybe doesn’t repeat itself, but it tends to rhyme and there is a sufficient amount of evidence that markets tend to mean-revert.

Another indicator which is widely used is the so called “Buffett Indicator” and the idea is quite simple. It measures the overall stock market capitalization against the GDP of the country. It is a very heuristic approach and the idea is that the stocks should be priced around the output of the economy- otherwise they are over (or under) valued. 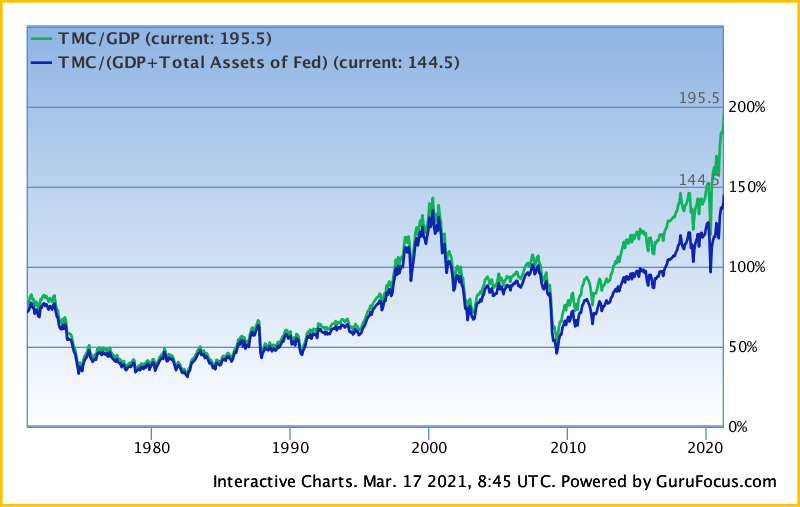 Once again, the market seems to be grossly overvalued, especially considering not only the absolute, but also the relative value to the historical average. (If you want to check out more charts related to Buffett Indicator, you can do so here) Moreover, we already surpassed the dot.com bubble by a large margin.

This metric was developed by a economics Nobel Prize Laureate James Tobin of the University of Yale. Now, my credentials are certainly not sufficient to argue with a Yale professor and a Nobel Prize Laureate, but there are some pitfalls to this metric in my opinion. From economic theory perspective, it makes complete sense, however, economists often work in a model-like market and assume not information asymmetry. Simply said, you have to assume that the asset on the balance sheet are:

The second point is evermore important in the modern ages. In economic theory, you assume that asset produce earnings and that’s it. It is more true for production companies, which rely on machinery etc. But we are shifting more and more to services business, which rely on “off-balance sheet assets”.

Those are all the things you cannot accurately measure and put on a balance sheet, like for example:

Those are just a few examples, there are many more of course. The point I’m trying to make is that nowadays, you cannot simply say the assets, from which the earnings stem from, are the only thing to be accounted for. Take Google for example: you could buy and replace every thing they own, but you simply wouldn’t be able to replicate the brand, the culture and know-how they have etc, thus earning not even a fraction of what they earn. Thus, it is reasonable that Google is priced higher, even with relation to its replacement costs.

Continuing with the graphs

That all being said, even if Tobin’s-Q is a more of a “deep value” metric, I think it is still useful to look at it in relation to the past, at least 20 years. As already mentioned, these metrics tend to be mean-reverting to some extent.

Once again, this metric is at historical highs, surpassing even the dot.com craze in 2000. I’ll leave the room for you to make a conclusion.

Do we start shorting or what?

If the market is so overvalued, wouldn’t it be wise to start shorting? Well, maybe yes, maybe no. Shorting is a completely different beast than buying and there is no inverse relationship between the two, meaning even when massively undervalued = buying , it doesn’t automatically imply that massively overvalued = selling/shorting. There are many reasons behind this, one of them being that I’m a longer-term buyer, so shorting is not part of my business.

So.. do we just wait for the apocalypse?

Again, yes and no. If I was a “whale investor”, meaning I had a big stack of money, I would certainly be pulling out of the market now and rather miss out on potential profits than get hit massively. However, I don’t have such a stack, but I’m dollar-cost averaging, which is actually the best money-management strategy for the average guy. If you want to learn about it more, read my previous article here .

The best things about dollar-cost averaging is that I don’t have to try to time the market or worry about the falling prices too much (I worry a little of course). That means, if the market keeps rising, I’m making money. If it starts falling, I can take advantage of the falling prices on a monthly basis.

For dollar-cost averaging to work, it is assumed that:

The second assumption is just as important as the first one. I try to ensure and fulfil that condition by picking high-quality value stocks for a good price. Historically, these stocks have been hit less in the downturn and also perform exceptionally well during recovery. Thanks, I’ll take that.

What about the money-management?

There are two ways to approach this. The first one is to develop some time-series, predictive model which tells you when approximately the downturn hits the bottom and adjust the allocation so that you allocate less during the decline and go aggressive during the rally. There is a problem with this and that being that there have not been enough recession to have some robust dataset, which could yield something useful and also, every recession is a bit different in what causes it and how the governments deal with it. Thus, I think it is impossible to predict the bottom of the decline. (If you want to read more about recessions, the average length and break-even points, check out this site)

I chose a more heuristic approach, meaning I will sacrifice a little of the performance, but save myself a lot of hassle and time. As I said, I will be dollar-cost averaging, that’s our starting point. Moreover, according to the logic of value investing, I would like to invest more in stocks which I deem more severely undervalued.

Now what do you do if you want to invest more into more undervalued stocks proportionally, so you take advantage of the severity of the undervaluation?

Okay, I know, math in text is a pain in the neck. Let’s take a look at it practically in a model excel sheet. 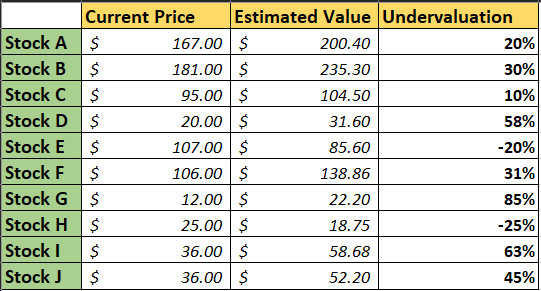 So, as I explained above, we have current market prices and estimated value (you can check out my analyses here to know how I estimate the value of a company). The relative difference in percent is the undervaluation (referred to as as margin of safety). Now, because we are buyers and not sellers, we will exclude stocks with a negative undervaluation to avoid shorting (negative weights). That can happen not because I bought an overvalued stock, but because the price might have evolved and overtake the estimate value.

Together with it, we calculate the average undervaluation of the 8 undervalued stocks. In this model example, it equals to 42.75%. 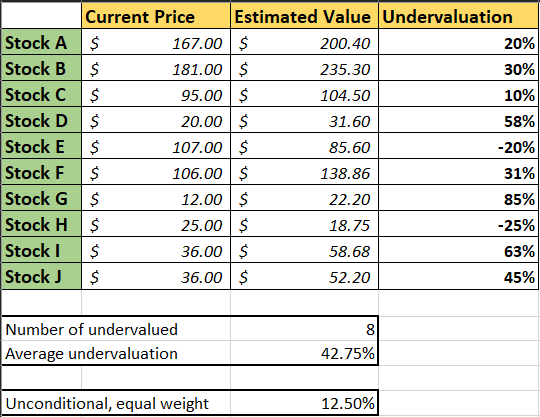 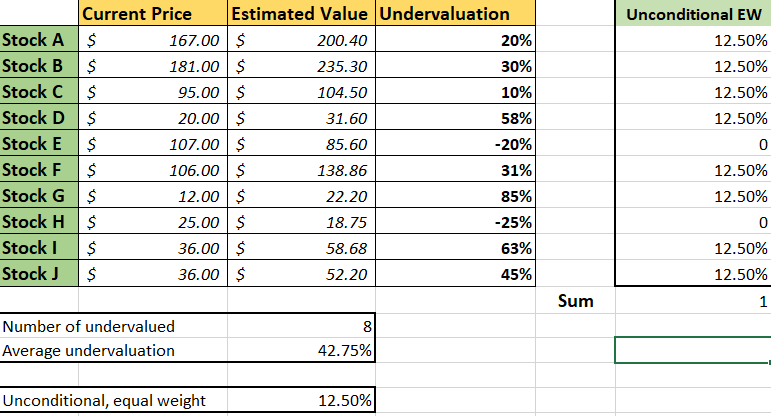 Lastly, we do the scaling, meaning we go heavier on the more undervalued stocks and less heavy on the less undervalued stocks. Again, we do this by adjusting the unconditional weight by multiplying with undervaluation/avg. You can see the final weights in the expanded table on right.

You can see that we met our goal: go heavier on the more undervalued stocks and vice versa.  As a control, I added a sum of all the weights so we are sure we didn’t make a mistake.

So, in practical terms, let’s say you have the $1000 every month and you generate such a price and estimated value table of the beginning of the month. Normally, you would simply put $100 into each stock. Now, we are a little more sophisticated with it. So because for example stock G is severely undervalued, by 85%, we will go the heaviest with 24.85%, or $248.5 dollars. Stock C is undervalued only by 10%, thus we’ll put only 2.92%, or $29.2. And Stocks E and H are trading higher than their value, thus we’ll not put any more money into them.

Keep in mind that:

And that’s it! This is how I will be dealing either with a rising or a falling market:

What are your thoughts? Let me know!

My name is Daniel and I’m currently pursuing Banking&Finance Master’s degree in Zurich, Switzerland where I work as an Asset Manager. I am passionate about finance and Buffett-style value investing, which this blog is all about.